John Wyma is the newest owner of this rust-free Loadside. He purchased it from the collection of Marvin Richer. The truck still had California license plates when John bought it, which makes sense since Marvin purchased the Loadside in 1977 when his collection was in California. About 1980 Marvin moved his entire collection to Crystal Lake, IL and didn't appear to drive this truck at all.

John has been busily working on the truck, both the body and mechanicals. As you can see in the pictures below, the truck had an aftermarket camper installed long ago, before Marvin bought it. John was told that it was a prototype camper. For some strange reason, a Loadside was chosen for the project instead of a Rampside, incredible as that may seem, given that the entire right side had to be cut out to make room for the camper door area.

"When I bought it, I was expecting to remove the camper and bolt on a ramp. I got quite a surprise, as I did not want a Loadside. Even Larry Claypool didn't notice this was a Loadside, when he looked it over before I bought it. Fortunately, the Loadside has no rust anywhere; solid floors—solid everything! It does not appear to have any body damage repaired anywhere. It was repainted white with a black stripe at some point.

I simply wanted a rust-free Rampside and bought a cut-up Loadside by mistake. There were gaping holes in the sidewalls and in the rocker panel. The sidewalls were not capped because they were covered by the camper and were caulked to it. The caulking job was pretty good because the inside of the sidewalls did not rot.

Since this truck was super-solid and rust free, I did not mind installing the jambs and rocker panel. The ramp is a different matter, as I will have to use three ramps with major sandblasting and welding to end up with one good ramp. The ramp will be a little time-consuming, but still a project within my skill level."

John went on to explain the major surgery completed so far:

"What I have done is remove the camper and very carefully graft in the jambs for the ramp. At this point, only an expert will be able to tell that it was originally a Loadside. Luckily the front cut was about 1/4 inch longer than needed and the rear was exactly the correct length to match the Rampside jamb."

"I am going to inspect another person's Rampside to obtain the dimensions of the reinforcing plate that belongs underneath the truck below the ramp hinge area. Once I have the dimensions, I will fabricate a new plate. I still don't have the ramp done but I am making progress. I now have a rock-solid, rust-free Rampside and that is what I was after in the first place. I would much rather weld jambs in than try to fix rust."

"The original engine, transmission, and differential are long gone. The power train in it now is from a car. The engine is a 1964 110 HP, the transmission is a 12-spline unit with a 3.65:1 first gear and reverse switch, and the differential has 2 spider gears, with a 3.27:1 ratio. I removed all of that and installed a 4.3 liter, fuel injected, reverse rotation Vortec V-6 engine."

Below are pictures John sent in May, 2011. I can't wait to see more as the project continues, especially of the power train! 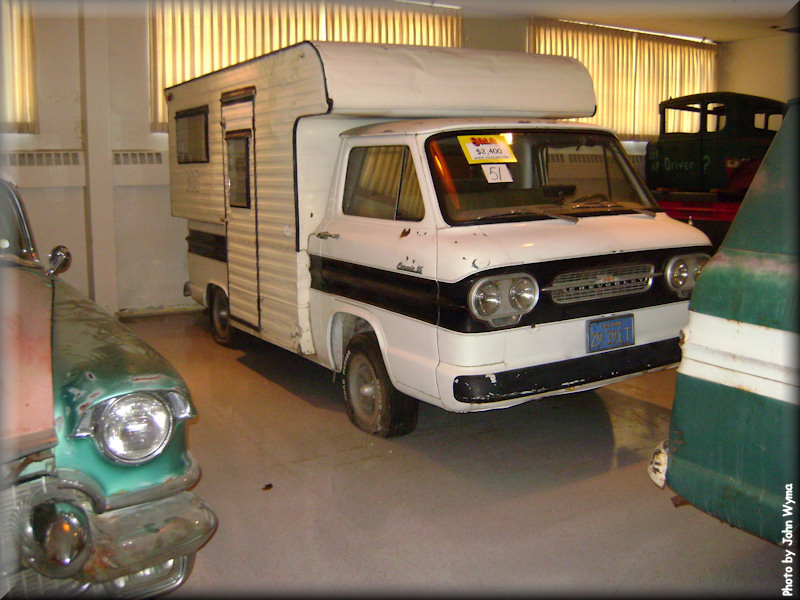 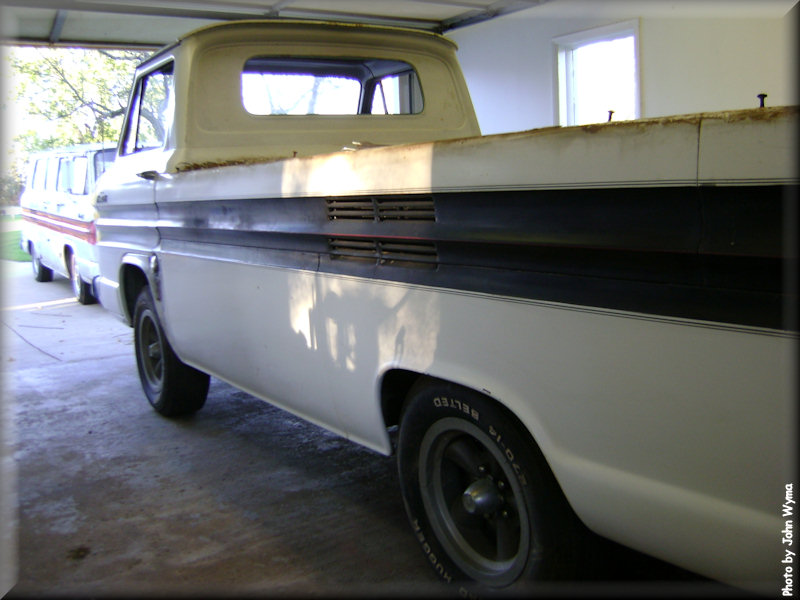 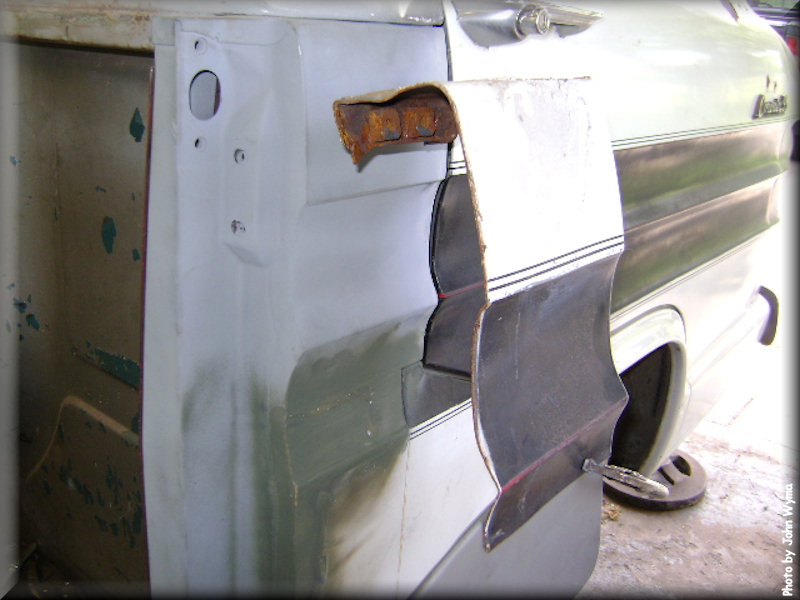 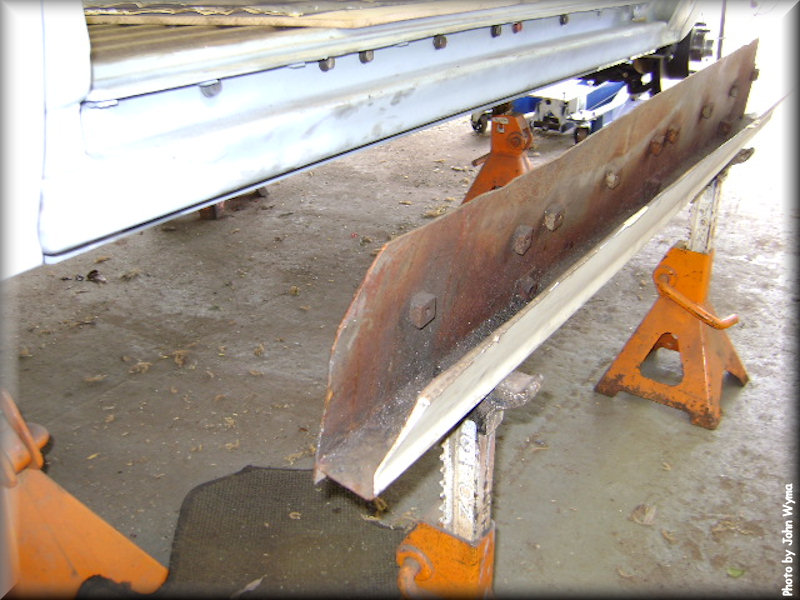 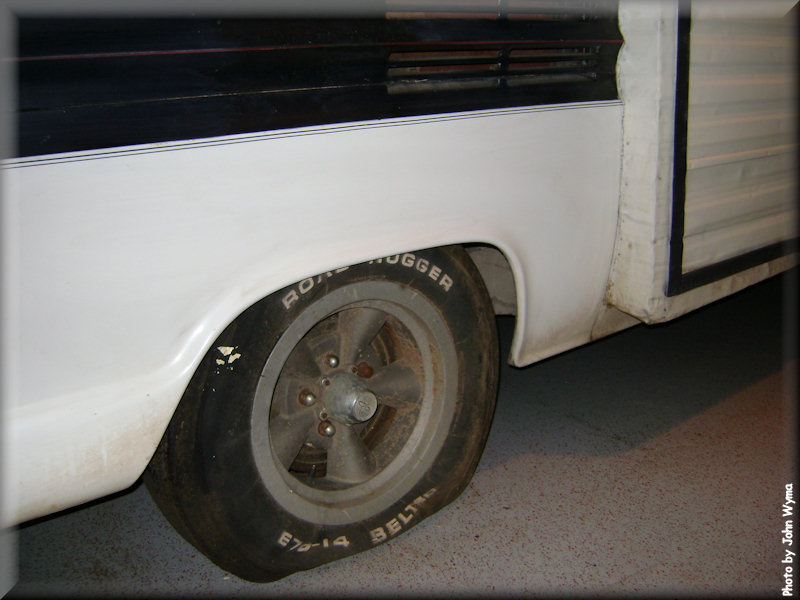 The picture below is from my friend Dan Davis, who owns a '63 Rampside with a camper made by Aluma Coach. You can clearly see the difference between the two installations in the area left of the door. In Dan's truck, the ramp jamb area is clearly visible. 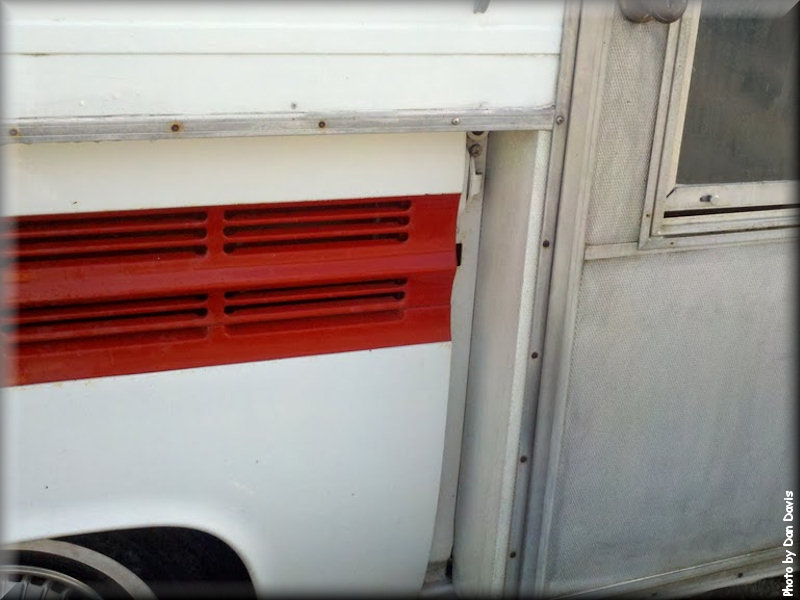