The mysteries of 1966 Corvair paint codes and trim codes

This article was published in the March, 2002 CORSA Communique.

Sometimes the smallest questions can turn into major spelunking expeditions. My desire to understand just one character of the Fisher Body tag for 1966 U.S.-built Corvairs is an example of that very phenomenon. (Canadian-built Corvairs have a different body tag.)

Larry Claypool, as part of his "Stock Is..." series of articles, discussed the results of a 1966 Corvair owners' survey in the January, 1993 CORSA Communique. One of the key sources of info about a Corvair is its Fisher Body tag, located on the rear frame rail of the engine compartment. He noted the following about the first line of the Fisher Body tags in the cars surveyed: "Further along the top, a single letter appeared on some cars; D, E, F, R, and S were all reported at random. I can find no apparent pattern to these as they were on various models with different equipment and at both U.S. locations. Thus, this one is still a mystery."

I'm a sucker for a mystery, especially one having to do with my favorite-year Corvair. I decided to start by collecting some fresh data on 1966 Corvairs. I didn't have immediate access to Larry's surveys but, fortunately, Virtual Vairs came to the rescue. Larry didn't have this resource in 1992. 160 1966 U.S.-built Corvair owners were kind enough to answer my query.

Initially, I wasn't able to make any more sense of these new data in 2001 than Larry had with the data he collected in 1992. The one exception is that I found the codes only on cars produced at the Willow Run location, not Van Nuys (Los Angeles). I contacted Larry along with Dave Newell (CPF Historian) over email and told them what I'd found. I then learned that Larry had solved the mystery after the article was published in 1993 but that his discovery had not been published. Dave also added several helpful details.

(updated July 2006) So, what does this letter mean? Dave explained it well: "These letter codes are on Fisher Body Willow Run body tags '65 - '69 except for '67. They are letter codes for each interior color combination and can also be found in the dealers' ordering information pages, in the color & trim chart. In '67, Fisher Body used a number instead of a letter.

Los Angeles (Van Nuys) cars didn't use these letters on their Fisher Body tags; apparently they started a system for the '67 model year with Camaros, but that doesn't concern us."

Ah-hah! I knew well to what chart Dave was referring—he had given me a copy several years ago. I had looked at the chart many times and never noticed these letters; it goes to show how easy it is to overlook information sometimes. As shown in Table 1 below, F = Fawn, T = Turquoise, S = White/Black (not available on sedans), D = Red, R = Bright Blue, E = Black, & Z = Bronze. For 500 models only, F = Fawn, B = Blue, & D = Red. The blue on 500s was different than Monza & Corsa, thus the different code. The dealers used these letter codes on their order forms. 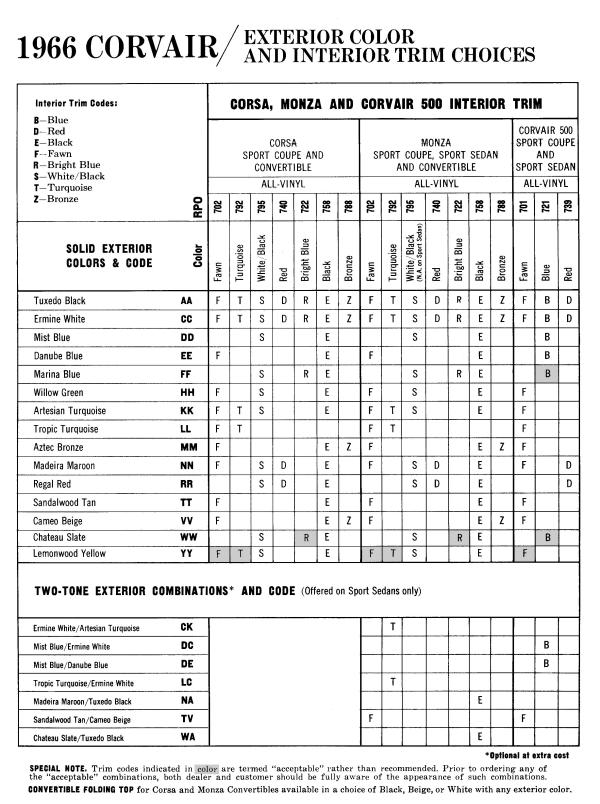 Dave sent me four versions of the color & trim chart for '66 Corvairs: 9/1/65, 11/1/65, 1/1/66, & 3/16/66. The 3/16/66 chart is reproduced here. Examining these four versions revealed that there were minor changes between 11/1/65 and 1/1/66; specifically, the introduction of "acceptable" color combinations in addition to the "recommended" ones. It also confirmed that there were many combinations not allowed by Chevrolet. Dave provided some great background info on these combinations: "This happened fairly routinely. The corporate Styling & Sales departments initially decided what looked good together and put restrictions on which colors & trims weren't available together, and which could be ordered on what models. As the model year progressed, the Distribution department and dealers got tired of orders with certain color/trim combos bouncing back (to the dealers, thus delaying them) for confirmation (you sure you want that?) before the car was built. Also, someone in the Sales department might have thought some of those restricted combos looked nice, maybe as something different for Spring. Before Corvairs were produced, GM used to have 'Spring colors.' The last gasp for Spring colors was when Crocus Cream & Roman Red were released late, for the '60 model year. Lastly, the popular, restricted combos might have been brought up in a National Dealer Council meeting and asked to be allowed."

In addition, the various editions of the 1966 Corvair catalogs, or showroom brochures, for the U.S. and Canada list some upholstery color differences and changes not found in the four versions of the Corvair Color & Trim Chart:

Dave commented on the first two items: "The Saddle color was planned for 1966 Corvairs but cancelled before production began. Note, though, that on the inside cover of the Canadian Corvair catalog, a white Corsa convertible is shown with Saddle interior, just like the first edition U.S. catalog. That picture was changed in the U.S. second edition catalog. Aqua upholstery wasn't offered in 66 Canadian-built Corvairs."

Regarding the third item, Dave checked the 1966 Chevy Canadian color & upholstery book and matched the upholstery samples in it with the ones in the 1966 U.S. dealer album. He commented, "As I suspected, Ivory was just the Canadian merchandising name for white upholstery. White and Ivory samples are the same color. Ivory does sound a bit more appealing! Also, the U.S. & Canadian grain pattern is exactly the same in the samples. I understand that the rolls of fabric and vinyl were imported into Canada, where they were heat stamped and sewn. GM Canada's new trim plant was opened in 'mid 1965' in Windsor, Ontario, so all 1966 upholstery was assembled there."

I next wondered why the Fisher Body tag appeared to contain redundant info: both a single-letter interior paint code and a three-digit trim code. Dave explained the reasons that both exist:

"The single-letter code that we've been talking about is really the GM corporate code for a particular interior paint color, shared by other Chevy car lines and other car divisions (except Cadillac), and was therefore the code that Fisher Body went by, just like the exterior paint code letters.

The three-digit codes like 758 and 740, also used on the Fisher Body plates on Chevrolet cars, were RPO numbers for interior options, that specified both color and type of upholstery. These RPO numbers were exclusive to a particular Chevrolet model. For example, red upholstery was Regular Production Option (RPO) 740 on Corvair Corsa and Monza and RPO 739 on Corvair 500s because the type of upholstery differed between the lower and the higher-end models. Chevy II used four different red RPO interior numbers, Chevelle used seven, and the full-size Chevy used nine! But to Fisher Body, every one of these red interiors was a code D, paint-wise, because they all used the same interior paint.

Use of the single-letter code on the body plate quickly told the interior painters at Fisher what color to paint the interior. Using this code made it a lot easier than trying to decipher the Chevy RPO interior numbers, which changed from car line to car line (e.g.., Chevy II and Corvairs at Willow Run). Los Angeles must have gotten by some other way, without putting the letter codes on the body plates."

When white is black...

Careful readers may have noticed that the color Black appeared twice in the color & trim chart for Monzas and Corsas, for the code 758 (Black) & 795 (White/Black) interiors. What exactly is the difference between the two?

Larry commented on the separate codes: "S and E both indicate black interior paint but the S is used with the white upholstery and the E is used with the black upholstery. The only difference in painted surfaces I am aware of is the trim cover on the inboard sides of the bucket seat backrests which are painted to match the seat color. "Dave continued, "As the interior areas were being painted on the Fisher side of the plant, they'd be painted exactly the same (in black) on both S & E code cars. The white seats would likely already have the white inboard trim covers installed before they were put in the cars."

Larry's and Dave's explanations were very helpful but didn't quite answer why the codes were different. Dave commented: "As to why Fisher Body used two different letter codes (S and E) for white/black and black interiors, when both interiors were painted black, I don't know. Maybe it was for bookkeeping or record keeping or perhaps there were more significant differences between the two interior options when they were used on other car lines." If anyone has more information about this, please contact Kent. For now, this is one mystery that we're parking on the sidelines.

Now that we can tell generally what the correct color is supposed to be for a '66 Corvair's interior, I bet you'd like to know how to re-paint a car's interior with the correct color. To the rescue comes the "1966 Refinish Paint Chart" from the September/October 1965 Chevrolet Service News. Table 2 contains the Corvair-related interior paint formulas from that chart.

(*) Formula 400 is nitro-cellulose lacquer while formula A-946 is acrylic lacquer. Both formulas are full gloss and require flattening agent to be added.

This chart can be pretty confusing so, luckily, Dave Newell prepared Table 3 below. This table maps interior paint codes to paint color names, which you can then look up in Table 2 to obtain formulas:

While working on the paint code mystery, I stumbled across another partially-understood body tag entry from Larry's original article. Larry observed that some '66 Corvairs had a single-letter code following the three-digit trim code on the Fisher Body tag and he made some tentative deductions about its meaning. Dave offered that these letters were known as "exceptions" to the trim code, to indicate special equipment related to the upholstery section of assembly.

The survey of 160 cars that I conducted, plus another look at the surveys Larry collected, shined some more light on this issue. Table 4 below summarizes the data and clarifies the deductions that Larry made back in 1993:

Note: We haven't been able to locate a '66 500 with headrest seats built in Los Angeles so the code for that combination is unknown at this time. If you own a '66 500 whose body tag has a trim code suffix of something other than A or E, please contact Kent!

The different letters helped the workers at the Los Angeles plant to remember to install a different type of upholstery in 500s (bench) vs. Monzas and Corsas (buckets). As to why Willow Run didn't use this system, we can only speculate that it had something to do with the internal plant operations. We have already established that the interior paint code letters were used in Willow Run and not Los Angeles, so there is a precedent for different procedures.

In reviewing all of the data from 1966 Corvairs to prepare this article, one other fact emerged: There is a difference in the codes used for convertible top colors between Willow Run and Los Angeles. The beige top color was code 3 at Willow Run and was code 6 in Los Angeles. As described in the January, 1993 "Stock Is..." article, the top color is found on the Fisher Body tag in the PAINT section. On convertibles, the first character in this section is the code for the exterior paint color and the second character is the top color. In addition to beige, tops could also be white (code 1) or black (code 2).