Thanks to Dave Newell for many key pieces of information!

Note: Research on this topic is still very much ongoing. It would be great if CORSA members could provide pictures of NOS or used examples of:

Let's begin with an overview of the standard and optional batteries that Corvair purchasers had available from the factory, as described in the two tables below:

C: "Clamp". Beginning in 1966, an indentation or trough was molded into the case along the length of both long sides of the battery, at the bottom. This coincided with the switch from an over-the-top battery hold-down to a clamp at the base. See Photo 6.

F: Originally "Ford" and used to indicate a reversed post arrangement. Over time, morphed into "Flange hold down". The group 22F and 22FC batteries used in Corvairs did indeed have a flange protruding from both short sides of the battery. It was unused in the Corvair but in other cars, like the Chevy II, it provided a clamping surface for securing the battery. See Photo 6.

The choice of a group 24T/24TC battery for RPO T60 may seem odd at first glance since it was much less common than the plain group 24 used on many other high-volume Chevy car lines as the standard battery. Research has shown that the 24T/24TC was offered across all of the Chevy lines as RPO T60 so this decision was also applied to Corvair. It's doubtful that the Corvair really needed the extra oomph of the 24T/24TC; the more common group 24 battery would have provided more than enough cranking power for the compression of the Corvair engine.

Until 1967, the battery construction was a hard rubber case with a tar top. All other Delco batteries available during this same period were also tar tops. In mid-1966, Delco came out with a completely new product line called the Energizer. This battery had a molded plastic case and is often referred to as a "hard top" battery.

At the time of the Energizer's introduction, the early Corvair was the only GM product using the group 53 Delco battery (556/557) so it was not offered in the Energizer line. The same tar top battery continued to be sold as a replacement well into the 1970s.

The 456/457 battery had raised lettering on the post side of the battery and it was painted yellow. See Photo 1. The 556/557 battery did too, through 1964. See Photo 2. Sometime later, the paint was dropped from service replacement batteries. We have one example from 1971 without the paint. See Photo 3. The yellow paint was visible in 1960 Corvairs due to the mounting orientation but faced the fender well from 1961-64. For some reason, the order was never given to paint the other side of the battery!

For group 53 batteries, the Delco wet part number (456 or 556) was stamped in the top center of the long side of the case.

The assembly manuals do not use the Delco part numbers but rather a typical Chevy 7-digit part number. In some years, the last three digits correspond to the Delco wet number for the battery. This confirms that the cars received batteries with acid on the assembly line. The acid was not added as a separate step before being driven off the line.

When the Energizer line was introduced, no wet part numbers were specified in the Delco literature, only dry. Wet and dry numbers continued to be specified for the previous battery series. Therefore, it appears that only dry Energizers were sold.

From 1960 until sometime in the spring of 1964, the caps were individual (one per cell). From that point on, the standard batteries switched to a vented three-gang cap with hose. Even though the battery type changed between 1964 and 1965, the same cap fit—the between-cell spacing was the same for the group 53 and group 22F batteries. See Photo 6 and Photo 7.

Because the cells were oriented differently on these two batteries, the caps for 1964 may have been assembled with the vent hose on the right with respect to the lettering. This would have allowed the DELCO lettering right side up when viewed from the rear of the car. The same cap was also used with the 1967-69 hard-top Energizer battery even though the Delco branding had changed. In contrast, 1968 and later Corvettes used a three-gang cap with the "modern" Energizer branding.

All RPO T60 heavy-duty batteries came with 2 two-piece vented cap covers and hoses. This provided the same functionality as the vented-three gang caps used on the standard batteries. These cap covers were used rather than modifying the 568/569 and R69 batteries to use push-in caps. See Photo 8.

It is unclear what caps were sold with at least some of the service replacement batteries. As Photo 4 shows, they may have been sold with individual caps after the three-gang caps became standard at the factory. Since only the last few months of early Corvair production used the three-gang caps, this is reasonably likely.

At this time, no exact reproduction batteries, caps, or hoses are available. The three items that are close to correct are: 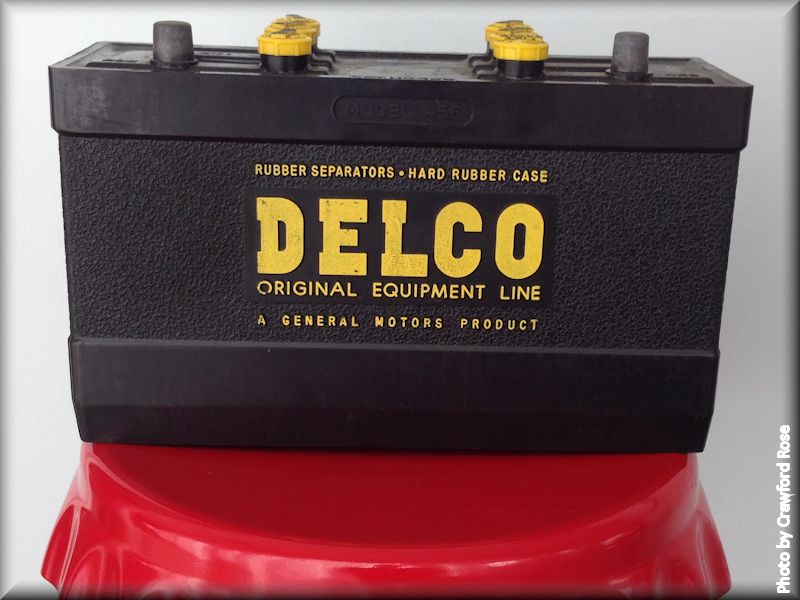 Note yellow paint on post side. This service replacement came in a box labeled "Corvair '60" so we know it was manufactured before the 1961 model year. Since the battery was sold dry, it is technically P/N 457. 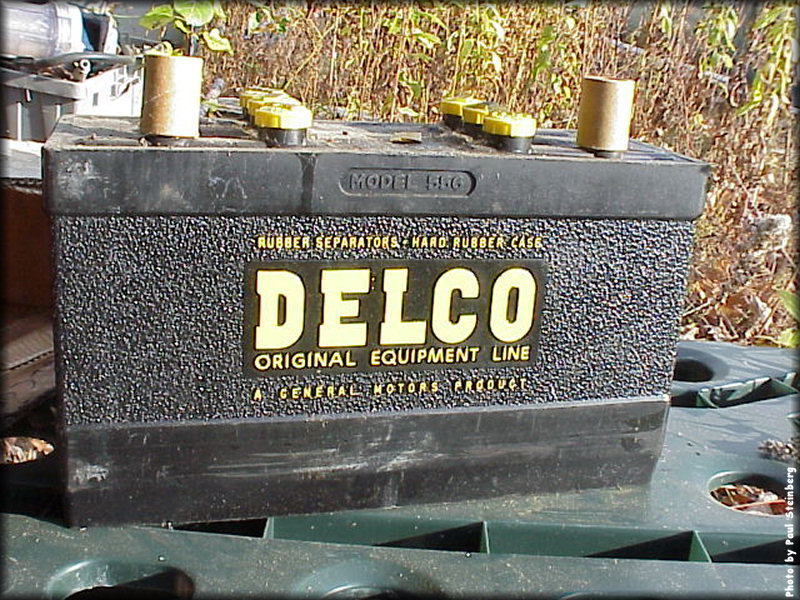 Note yellow paint on post side. This service replacement came in a box labeled "1960-61 Corvair" so we know it was manufactured before the 1962 model year. We have pictures of an identical battery (including yellow paint) with a box that says 1960-63. Since the battery was sold dry, it is technically P/N 557. 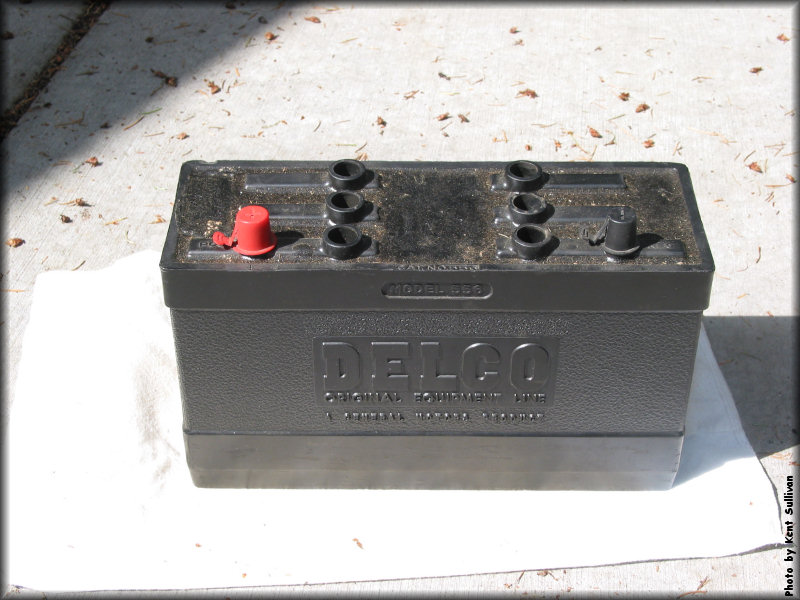 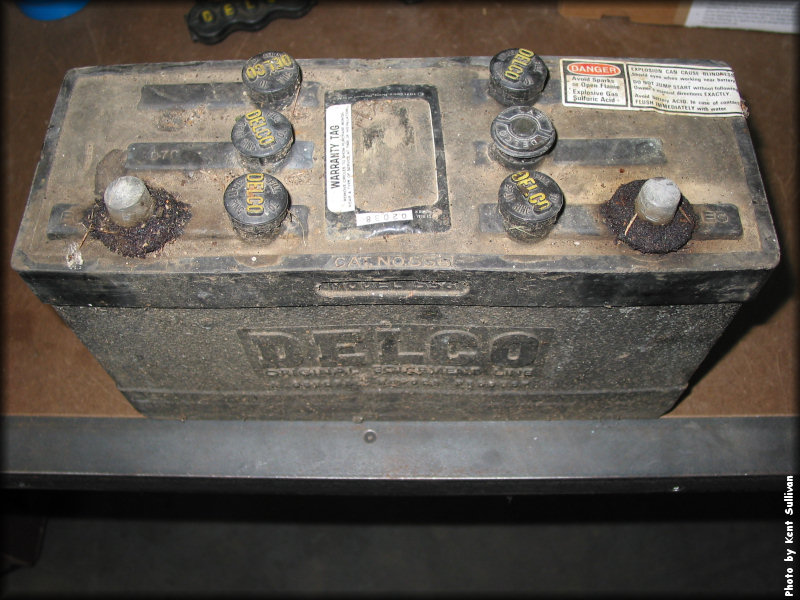 Note: This battery was sold in 1971 or later given the copyright date on the warranty tag. Note the single push-in caps instead of three-gang caps. Also note the special Delco eye cap, first available in 1967. 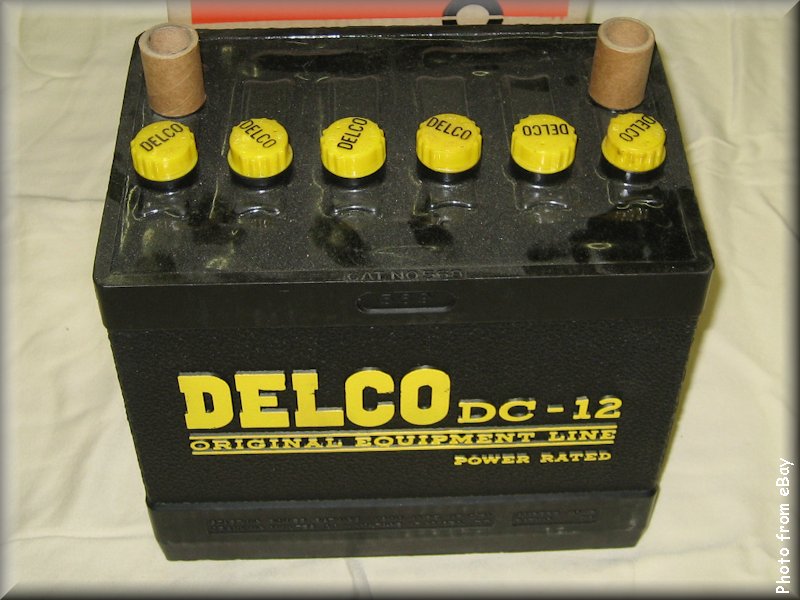 Note: This battery was sold on eBay in early 2014. The NOS cardboard box lists model applications up through the 1963 model year, so it was produced sometime during that timeframe. The part number on the top of this battery appears to be 568 while the number on the side appears to be 569. The number on the cardboard box is 569. The box also mentions that it is not for the Corvair application, which was true in 1963, since the Group 24T battery was not offered as RPO T60 until 1965. 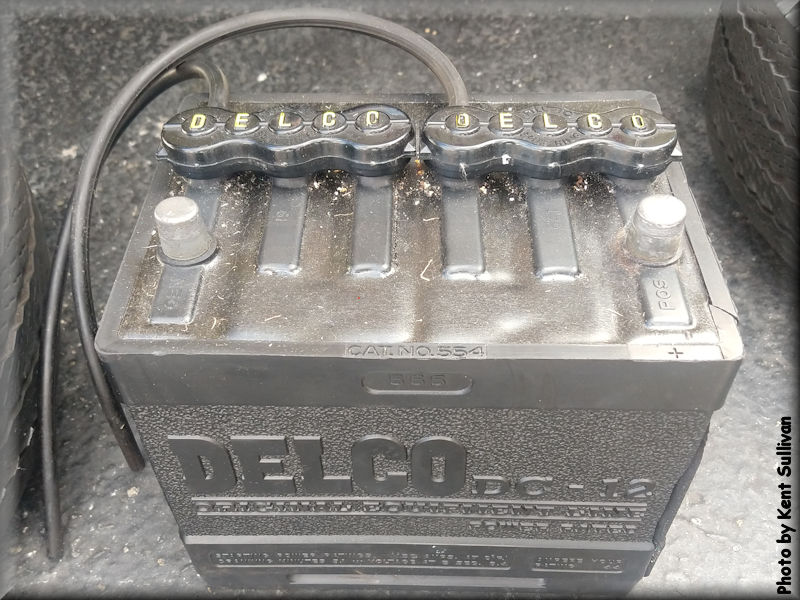 Note: This battery is from a 1966 Monza coupe with less than 5500 original miles. It may be the only example of a Group 22FC DC-12 battery still in existence, since it was a one-year-only design, superseded by the Energizer line at the parts counter in mid-1966 and in factory installations just after that, at the beginning of the 1967 model year. 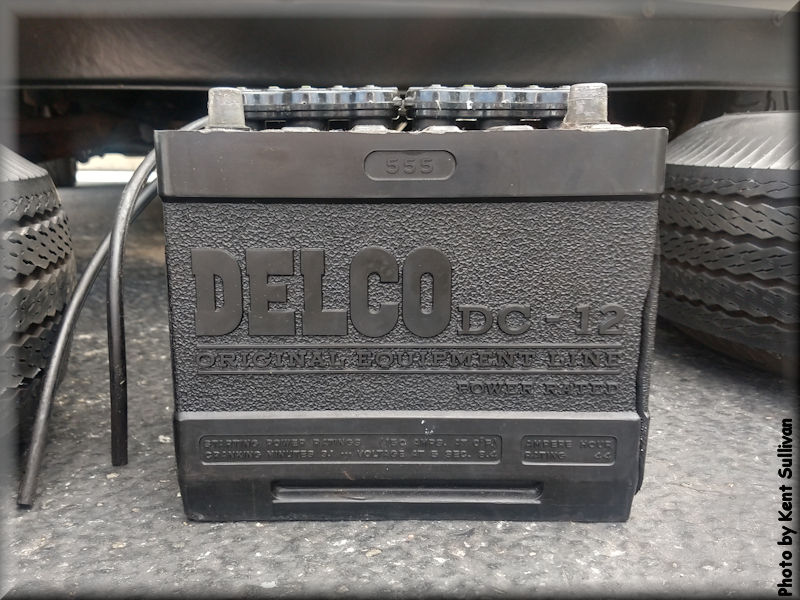 Note: The case is cracked, likely from freeze-thaw cycles during the years the car was not driven. Thanks to Rod Squires for letting me photograph this battery! 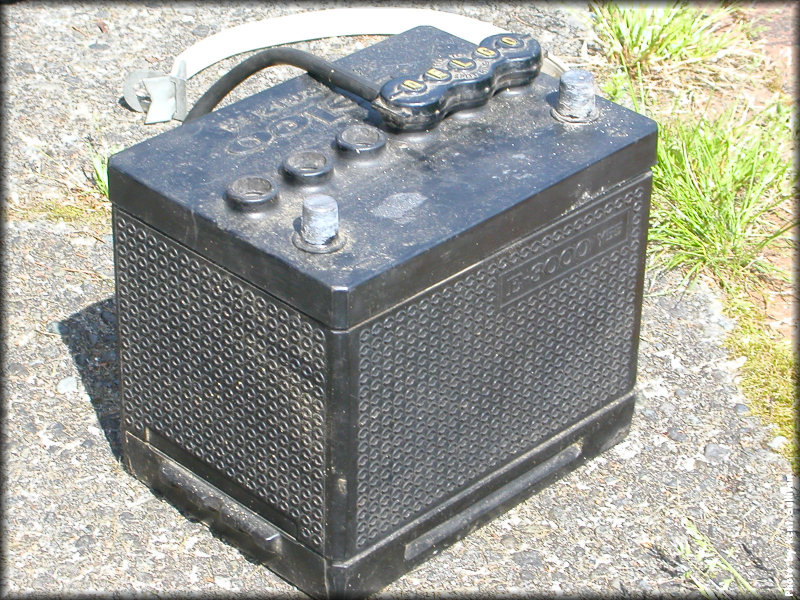 Note: Both groups of cells had vented battery caps. We removed one set to show the cell openings. Thanks to Jim Brossard for letting me photograph this battery! 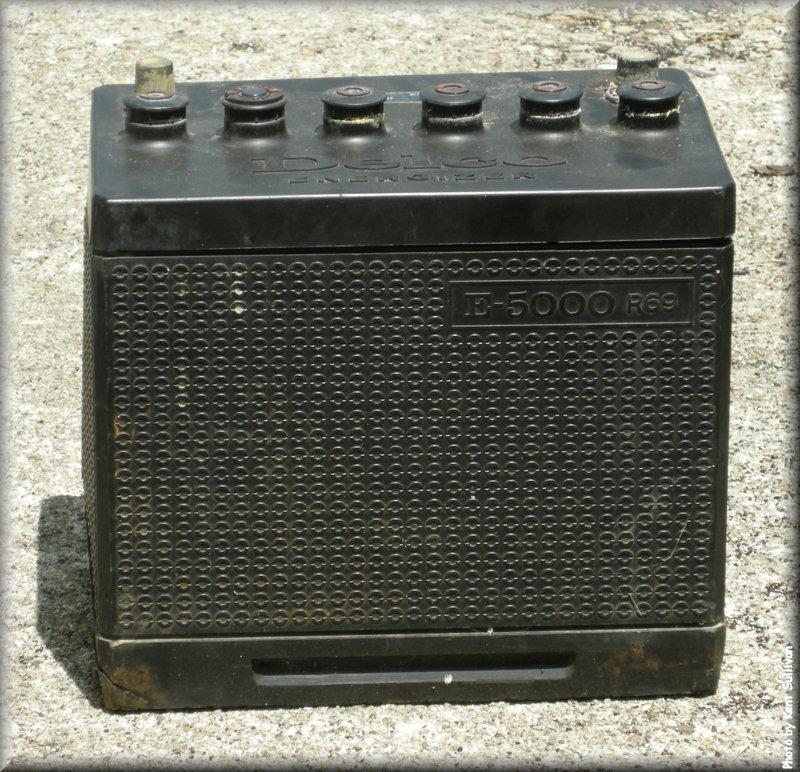 Note: This battery was removed from a 1969 Corvair Monza coupe (#3625). Thanks to Mike McKeel for letting me photograph this battery!

Mike also had a Y55 so we were able to do a side-by-side comparison. Notice how much longer and taller the R69 is!

Same two batteries from the top—the R69 was also wider than the Y55. Note the tag on top of the R69. It reads: "Recommend replacement with Energizer R69". I assume that means this was an original factory-installed battery! The Y55 was a replacement battery from 1972 or later due to the year range provided on the warranty tag.